Global SFC/Valve is located in Somerset, Pennsylvania, 14 miles from the crash site of United Airlines Flight 93.

Several passengers and flight attendants learned through phone calls that suicide attacks by hijacked airplanes had already occured at the World Trace Center in New York and the Pentagon in Washington.

The brave passengers attempted to retake the plane from the hijackers.  During the struggle the plane crashed into a Field near a reclaimed strip mine in Stonycreek Township, near Indian Lake and Shanksville, about 65 miles southeast of Pittsburgh.

It has been 20 years since that fateful day, we honor and remember the sarifice of those brave souls.

Part of Article from Wikipedia

Global Inc in Somerset, Pennsylvania and Custom Hydraulic and Machine in Kent Washington have available job opening for Shipping and Receiving personnel. Functions of the position are to review contracts, look up packing codes, and package outgoing shipments. Receive and properly input all incoming materials into their respective locations. For the full job description, you can e-mail jobs@globalsfc.com. Regularly scheduled work hours are 10 hour shifts Monday through Thursday. We offer a full benefit package with 401K and profit sharing. Applicatoins are available at both of our locations. We welcome you to provide a resume. We are located at 160 Cannery Road, Somerset, PA 15501. We are located at 22911 86th Avenue South, Kent, Washington 98031. 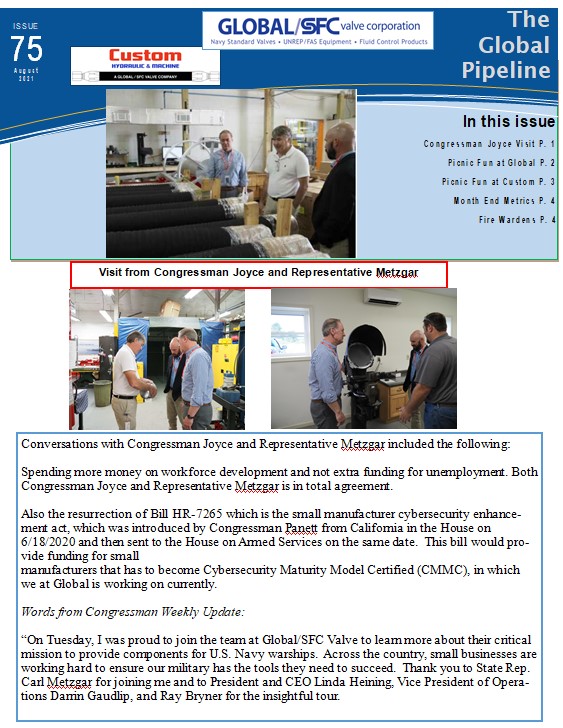 Ethan Birth is a new employee at Global, who will be entering our machinist apprenticeship program.  See his YouTube that is listed below:

"As we express our gratitude, we must never forget that the highest appreciation is not to utter words, but to live by them"  John F. Kennedy