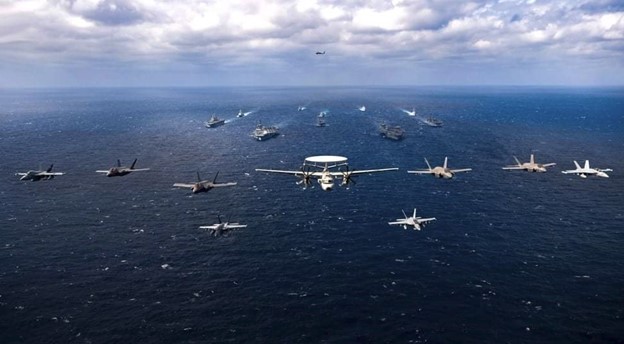 Huntington Ingalls Industries is expected to deliver Fort Lauderdale (LPD-28) in the first half of 2022, the company announced during a press briefing Wednesday.

Fort Lauderdale finished her Bravo trials at the end of 2021, said George Nungesser, vice president, program management for Ingalls Shipbuilding. The ship was christened in August and is the 12th San Antonio-class ship produced by the shipbuilding company.

As Huntington Ingalls finishes with Fort Lauderdale, it has already started outfitting Richard M. McCool (LPD-29), which launched this week, Nungesser said. The ship is the 13th in the San Antonio-class and is expected to be delivered in late 2023.

The shipbuilder is also working on Harrisburg (LPD-30) and is contracted for Pittsburgh (LPD-31), said LPD program manager Steve Sloan.

While the ongoing COVID-19 pandemic has caused supply chain concerns, Huntington Ingalls has been able to mitigate any major disruptions, Nungesser said.

Looking to the future, Sloan said it is important to see the funding for LPD-32, as well as some predictability for the LHA-10. Huntington Ingalls is already under contract for LHA-9.

It would be nice to have a 30-year plan for shipbuilding from the Navy, Sloan said, adding that it has been some time since there has been a long-term plan. The Navy is expected to give a plan shortly, and Sloan expects to see amphibious assault ships in it.

Article by Beth Ann Miller for the Daily American in Somerset, Pennsylvania November 1, 2021

Three Somerset County tradesmen are advancing their machining skills as they learn to make some of the critical components that keep the U.S. Navy’s ships afloat and operating at standard speed.

Logan Miller, 23, of Meyersdale, Thomas Walters, 19, of Listie and Ethan Birth, 18, of Berlin, are participating in a new apprenticeship program at Global/SFC Valve, in Somerset, which manufactures standard valves and components used on U.S. Navy ships, including the U.S.S. Somerset.

Global/SFC Valve received approval from the state last year to start an apprenticeship program, company President Linda Heining said. On Oct. 15, the company was awarded a $21,203 grant from the state Department of Community and Economic Development’s Pre-Apprentice and Apprenticeship Grant Program.

The grant covers the costs involved for Global/SFC Valve to offer classroom and on-the-job training to these three apprentices, with coursework supplied by the National Tooling and Machining Association – University, aka NTMA-U.

Each of the three men are in the first year of their training.  Miller and Walters were hired by Global/SFC Valve in 2020 and started their training last year.  Birth was hired in July of 2021 and started his training shortly thereafter.

“What makes this program very special is in three (more) years, these gentlemen will get their journeyman papers through the state of Pennsylvania,” she said.  “It’s like a four-year (college) degree – and they’ll be machinists (level) 3 also.  If they are successful through the program, every year the company increases their pay as well.”

An apprenticeship program has been a longtime goal for the company, Heining said.  Former CEO and President Bob Kirst saw similar programs offered by other companies and said he wanted to create something there.

“It was always Bob’s dream to have an apprenticeship program, but unfortunately he passed away before it got to be implemented,” she said.

“Being we got them from the (SCTC) program, they did have some basic skills coming in,” said Skip Bryner, Global/SFC Valve production manager.  “So, you’re not starting at zero.  They come in with good knowledge and a desire to learn.

“With what they learned there, they come in and they’re definitely going to be a lot faster coming up to speed.  There’s improvement with all three of them and they’re working with somebody all the time to become more independent on their own.”

Learning while earning a paycheck

As apprentices, these three men have an opportunity to advance their education and ear their journeyman machinist papers while working fulltime and earning a paycheck, along with company benefits like health insurance coverage and a retirement savings plan.

“You can go to a university and get the same journeyman papers,” Birth said. “in fact, there are three schools in Pittsburgh that offer a fairly similar program and you get the same journeyman paper from the same institute.  But the people that are going to those universities and getting that same degree, they don’t get the benefits, they don’t have the medical benefits for those four years, they don’t get the paycheck for those four years – and they have debt (when they graduate).

“Going into this apprenticeship, we’re getting paid, we don’t have any debt, we have full medical benefits and we’re getting retirement benefits.”

Investing in their workforce

Heining said the apprenticeship program also enables Global/SFC Valve to invest in its future workforce by hiring and training three young tradesmen who came highly recommended by their SCTC instructor.

“It absolutely helps our workforce,” she said.  “We now have three young guys (working).  A lot of our machinists are getting older and are getting read to retire, so we have some replacements.

“The manufacturing industry has been talking about this for years, that ‘Hey, your workforce is getting older, you need to get some younger people involved.’ And that’s when we came up with the apprenticeship program.”

Bryner added: “It’s all an investment in the employees and the company.”

In addition to these three new apprentices, Global/SFC Valve is training two long-time employees – each with about 20 years of work experience – who wanted to earn their journeyman machinist papers.  They are expected to graduate next June.

“They only needed two years (of study) because they already had the experience,” Heining said.

Global/SFC Valve has 50 employees, including machinists, welders, inspectors, and assemblers.  Together, these employees produce components that help the U.S. Navy to operate its fleet of nearly 300 active ships and submarines, send tankers to refuel ships at sea and safety transport military personnel throughout the world.

“It’s not just one person working on an entire valve, it’s a whole group of people with team effort putting time an effort into the part,” Walters said.

Heining added: “If one of the valves fail, it could crash the submarine.  Lives are at stake with the products that we make.  We’re considered a critical supplier to the Navy”

The three apprentices said they’re learning a lot from their training and are thankful for the apprenticeship opportunity.

“I went ahead with it because it’s going to be more helpful for me in the company, to learn more about the trade,” Miller said. “It will make me a better machinist, more valuable to the company.”

Walters added: “It means that I get to learn more and it’s helpful for the company, because the better I am at doing my job and learning my job, the better the company is.”

Birth agreed and added that he’s proud to pursue a career that supports the nation’s military.  He mentioned that his brother is currently serving in the U.S. Army. “I wanted to be a mechanical engineer in the Air Force…but I wouldn’t be able to serve,” he said. “This is one of the reasons I decide to come here. I’m not able to serve but at least this way, one, it’s a great company (to work for) and two, it’s making valuable parts for the men and women that are serving and makes their life easier.”

Global SFC/Valve is located in Somerset, Pennsylvania, 14 miles from the crash site of United Airlines Flight 93.

Several passengers and flight attendants learned through phone calls that suicide attacks by hijacked airplanes had already occured at the World Trace Center in New York and the Pentagon in Washington.

The brave passengers attempted to retake the plane from the hijackers.  During the struggle the plane crashed into a Field near a reclaimed strip mine in Stonycreek Township, near Indian Lake and Shanksville, about 65 miles southeast of Pittsburgh.

It has been 20 years since that fateful day, we honor and remember the sarifice of those brave souls.

Part of Article from Wikipedia

Global Inc in Somerset, Pennsylvania and Custom Hydraulic and Machine in Kent Washington have available job opening for Shipping and Receiving personnel. Functions of the position are to review contracts, look up packing codes, and package outgoing shipments. Receive and properly input all incoming materials into their respective locations. For the full job description, you can e-mail jobs@globalsfc.com. Regularly scheduled work hours are 10 hour shifts Monday through Thursday. We offer a full benefit package with 401K and profit sharing. Applicatoins are available at both of our locations. We welcome you to provide a resume. We are located at 160 Cannery Road, Somerset, PA 15501. We are located at 22911 86th Avenue South, Kent, Washington 98031.